The Importance of Reliable Ketone Testing in Dairy Cows

The Importance of Reliable Ketone Testing in Dairy Cows

The period between calving and end of lactation is a critical time period that strongly correlates with the health and milk production of the cow. During this time, cows can slip into a state called ketosis, putting them at risk of decreased milk yield, impaired reproductive performance, and developing other illnesses – all ultimately leading to economic loss.1  Ketosis is a metabolic disorder that occurs when the body is not receiving enough carbohydrates for metabolism, causing it to rely upon its fat reserves for energy. In dairy cattle, ketosis can become an issue during calving, when the energy required for lactation is greater than the energy consumed by the cow. It is estimated that as many as 50% of all dairy cows are at risk of ketosis, with most clinical cases occur around 2-3 weeks after calving2.

Ketosis in cattle can be identified by a number of clinical signs, such as reduced milk yield, weight loss, decreased appetite and dullness of the coat. Ketosis can result in immunosuppression, making the cow more vulnerable to other diseases. 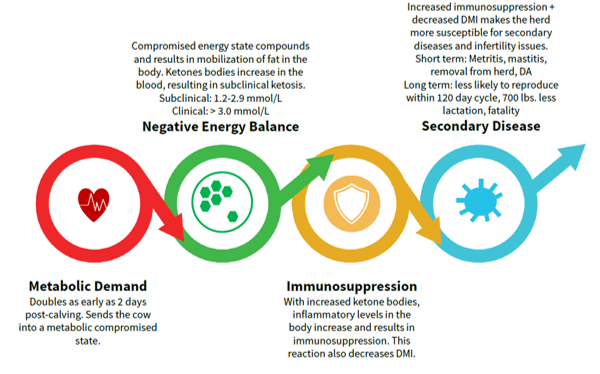 Many cases of ketosis in dairy cattle are subclinical, and so diagnoses may not be performed until it’s too late. Subclinical ketosis alone during the first week of lactation can decrease milk yields by  up to 4.6lb a day, and cows with subclinical ketosis are on average 3x more likely to be removed from the herd.2  Regular monitoring of those at risk (ie during the lactating period) for early detection and nutrition management is therefore essential at preventing ketosis.3

The gold standard method for ketosis testing in dairy cows is through measuring the levels of blood β-Hydoxybutyrate (BHBA)1,4. BHBA is one of the primary ketones present in the bloodstream, making it a useful biomarker for ketosis. Subclinical ketosis is considered when ketone levels reach between 1.2-2.9mmol/L. This is an important threshold for dairy cows to detect advancing cases of ketosis and can be used to predict health risks during early lacation.3,4,5 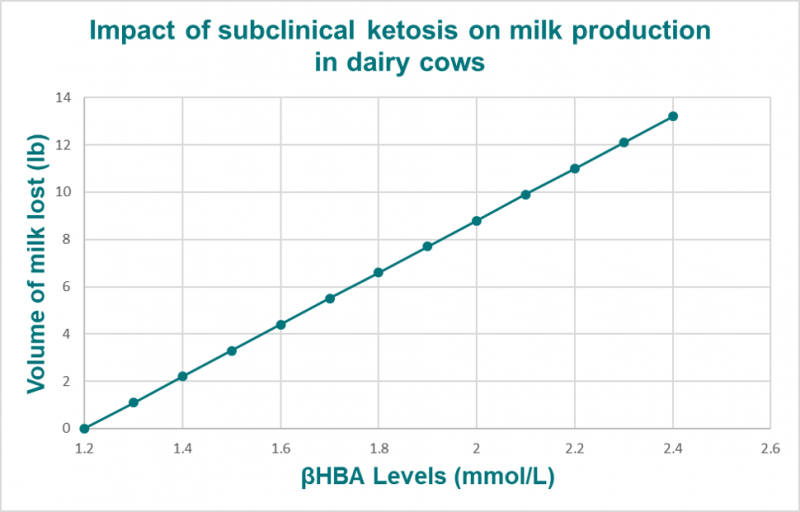 Fig 1. US study showing the economic loss of ketosis across four dairy herds. For every 0.1mmol/L increase in BHBA levels after 1.2mmol/L, 1.1lb of milk was lost. Oetzel G. R. 2012. Understanding the impact of subclinical ketosis. Proc. Of the Cornell Nutrition conference for feed manufacturers. 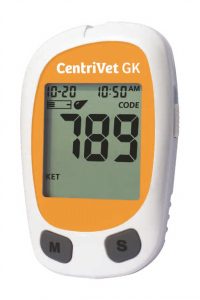 tool that can be used for upstream assessment of subclinical ketosis in dairy cows. Specifically calibrated for bovine blood, the monitor provides accurate quantitative results to ensure confidence in your results for accurate diagnosis and disease management.

CentriVet™ products are distributed exclusively in the UK by Rapid Labs Ltd. Please get in touch if you would like further information or to order this product and we will be happy to help.
Tel: +44 (0) 1206 250484
Email: info@rapidlabs.co.uk