Why you should consider using a guanidine-free RNA stabilisation reagent

Why you should consider using a guanidine-free RNA stabilisation reagent

Guanidine, also known as guanidinium, GTC and GHCL is a chaotropic agent that denatures and unravels proteins and nucleic acids. It can be used to separate RNA from DNA through the denaturation of nucleases (eg RNAse), stabilising both the RNA, DNA and proteins. This chaotropic property of guanidine makes it a useful reagent for molecular applications:

1) lysis buffer for viruses, bacteria and mammalian cells prior to RNA and/or DNA purification

2) sample collection buffer for microbes including viruses, bacteria and fungi

Guanidine is found in most front-end RNA purification kits and is used in most home-testing collection tubes and swabs.

It is a popular reagent because it inhibits enzymatic activity particularly ribonucleases (RNases) and is reputed to kill viruses. It is a moderately good RNA stabiliser at room temp but a poor stabiliser when warmed above 30°C. As a result there is currently a global shortage of guanidine.

Guanidine is commonly mixed with detergents and buffers before use. It is used at high concentration, commonly 4-7M. When mixed with acids, alkalis and oxidising agents such as bleach creates a highly toxic gas called Hydrogen cyanide (HCN).

The importance of using a guanidine-free RNA stabilisation reagent

RNAssist’s range of reagents, genoPHIX™, vivoPHIX™ and virusPHIX™ are guanidine-free RNA stabilisers. Not only are they safer to work with (non-toxic, non-volatile meaning it can be used without the need for a fume hood), the reagents also offer the same level of RNA stabilisation and viral/bacterial inactivation.* Unlike other guanidine-containing RNA stabilisation reagents on the market, the RNAssist range are compatible with most front-end RNA purification kits because there is no guanidine to react with. This means that RNAssist-treated samples can be added directly to purification kits, without the need to remove it first, which can be a very difficult procedure, often impossible to achieve when working with viruses. 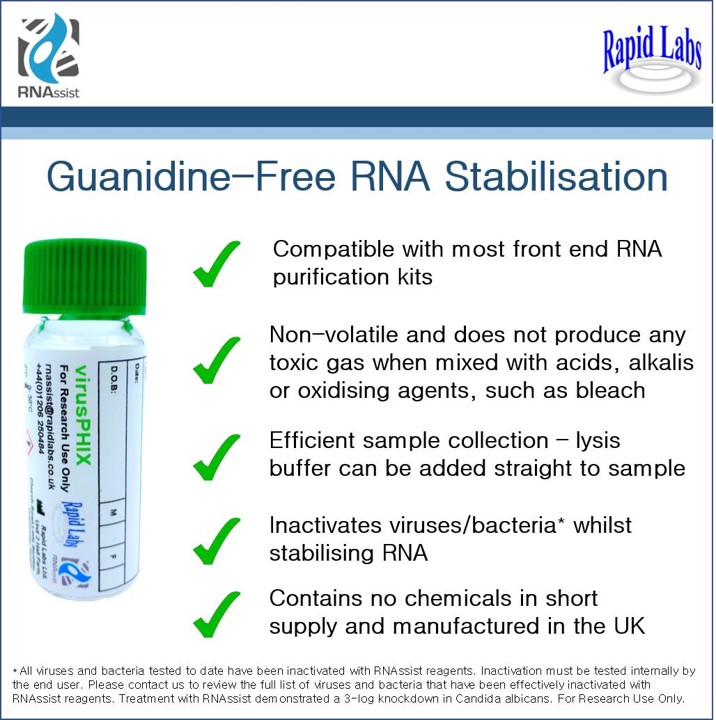 If you are looking for an alternative RNA stabiliser or virus transport medium, RNAssist’s guanidine-free range of reagents offer safe handling, compatibility with purification kits and efficient sample collection. RNAssist reagents are manufactured in the UK using materials with no known shortages.

Get in touch now to find out how our RNAssist reagents could help with your research projects. Please email us at rnassist@rapidlabs.co.uk and our team of technical experts will be happy to help.